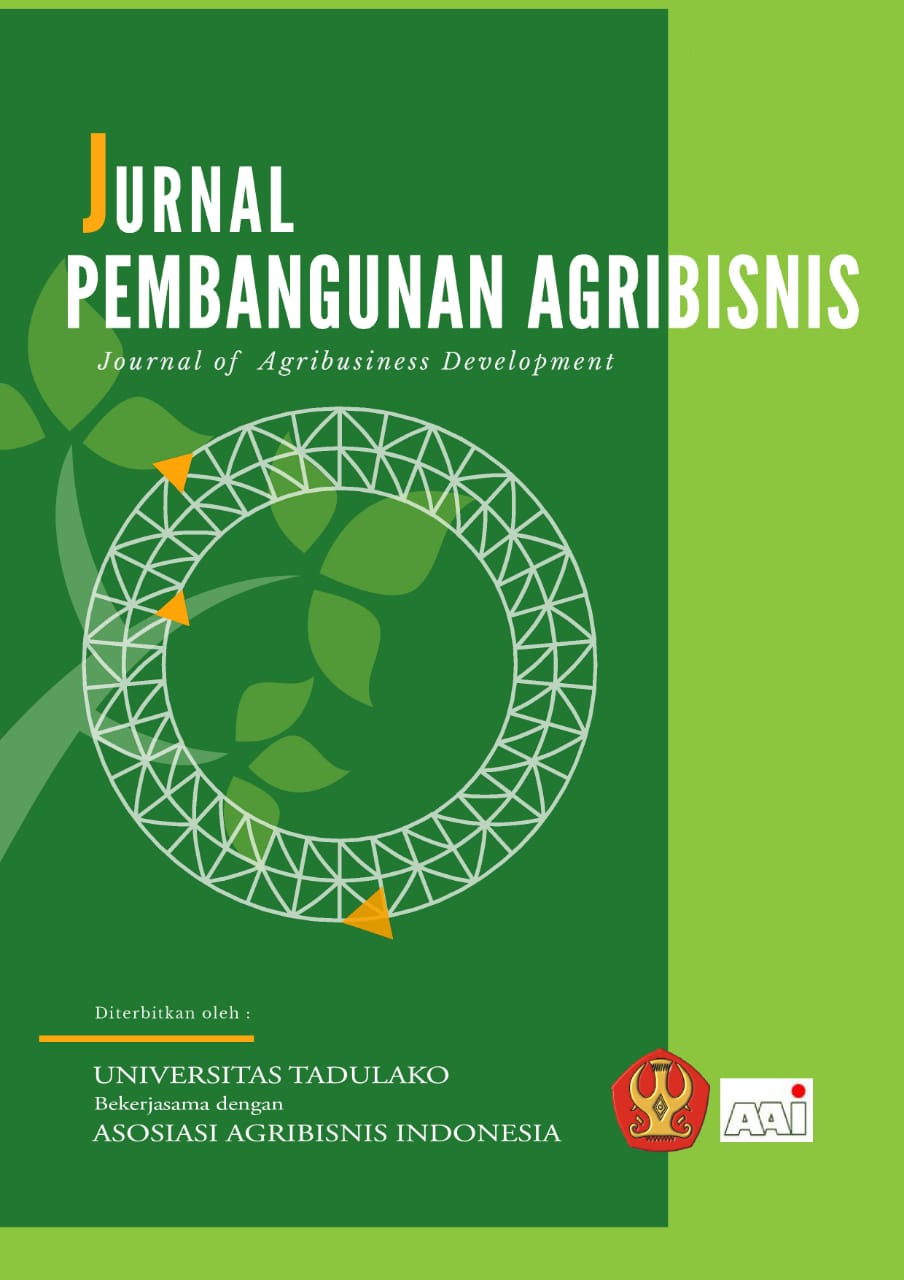 Sahrul SMEs is an example of a real contribution to the industrial-based agriculture sector by processing banana king into chips to provide more selling value. The availability of abundant Banana king commodities makes Sahrul SMEs utilize these commodities as raw materials in food-based industrial activities. However, the price of some supporting materials used in processing banana king into banana chips is still relatively high and some processes use large costs. Because of this, there needs to be an analysis of income and the amount of added value on banana chips till business can develop and continue. This study aims to determine how much one-time production income and to find out the value added of banana chip products at Sahrul SMEs. This research was carried out at Sahrul SMEs, Rampadende Village Dolo Barat District Sigi Regency, in September-November 2019. The results showed that the income earned by Sahrul SMEs in one month of production was Rp.2,096,458, - value added analysis of Rp. 141,000 with a ratio of 0.64% of the raw materials used with a profit of Rp. 120,167 or 0.85% of every one banana bunch used.
More.. PDF
Abstract PDF
Articles
ANALISIS PENDAPATAN USAHATANI BAWANG MERAH DI DESA GUNTARANO KECAMATAN TANANTOVEA KABUPATEN DONGGALA
Suratno Suratno, Christoporus Christoporus, Dance Dance
Abstract 49

The local hammer onion plant is one of the sources of i ncome for the people of the central Sulawesi who work in the agricultural sector and is also a source of local revenue, the local hammer onion plane plant has become and important commodity in central Sulawesi because it is an exsport commoditi for the central Sulawesi region. In general, an increase in the production of a farm cant be an indicator of the success of the farm in question, however the high production of a commoditi obtained by land area unity does not guarantee the high in come of shallot farming which is influencet by the price received by the farmer and the cost of using farm inputs. This study aims to the termine how mucth in come of shallot farming. Respondents were the terminate using simple random sampling method. The numbers of respondents who were a ssigned as samples in this study where 31 people from a total population off 108 people. The results showed that the average in come of shallot farming in the village of Guntarano was Rp. 19.076.532,26/ 0,74 ha/MT or Rp. 25.779.097,66/ha/MT.
More.. PDF
Abstract PDF
Articles
ANALISIS PENDAPATAN USAHATANI JAGUNG DI DESA SIDONDO II KECAMATAN SIGI BIROMARU KABUPATEN SIGI
Salma Salma, Effendy Effendy, Al Alamsyar
Abstract 25

This research aims to find out how much the income of corn farming in Sidondo II Village, Sigi Biromaru District, Sigi Regency. This research was carried out in Jamuary to March. Determination of respondents was carried out using the simple random sampling method. The data collected in this study are in the form of primary and secondary data.The number of respondents determined as a sample in this study was 31 people from the total population of 102 people. The results of the analysis show that the average acceptance of corn farmer respondents is Rp.8.890.322,58/0,75ha /MT or equivalent to Rp.11.853.763,44 MT/ha, the average total cost of respondents to corn farmers is Rp.4.199.989,48/0,75ha /MT or equivalent to Rp.5.599.985,97/ha/MT, so that the income obtained by the respondents of corn farmers is Rp.4.690.333,10/0,75ha /MT or equivalent to Rp.6.253.777,47/ha/MT.
More.. PDF
Abstract PDF
Articles
ANALISIS PENDAPATAN USAHATANI PADI SAWAH DI DESA BERABAN KECAMATAN BALINGGI KABUPATEN PARIGI MOUTONG
Moh Resky Nugraha, Dance Dance, Made Krisna Laksmayani
Abstract 32

This study aims to determine the income of lowland rice farming during the Covid-19 pandemic in Watunonju Village. Determination of the location is done intentionally (purposive), the number of respondents as many as 35 people from the population of rice farmers as many as 160 people. Determination of respondents using the Slovin formula. Analysis of the data used is income analysis. The results of this study show that the average total farming costs incurred during the Covid-19 pandemic are Rp. 6,562,208.06/1.1Ha/MT or Rp. 5,900,463.69/1.1Ha/MT. The average income obtained by farmers is Rp.15,176,571.42/1.1Ha/MT or Rp. 13,796,883.12/1.1Ha/MT of the average production of 1,686.28/1.1Ha/MT multiplied by the average selling price of rice at the farmer level of Rp. 9,000/Kg so that the average income of paddy rice respondent farmers in Watunonju Village during the Covid-19 Pandemic in one planting season is Rp. 8,614,363.37/1.1Ha/MT or Rp. 7,831,239.43/1.0/Ha/MT.
More.. PDF
Abstract PDF
Articles
MANAJEMEN PERSEDIAAN BAHAN BAKU BAWANG PUTIH GORENG PADA UKM SOFIE LOCALFOOD DI KOTA PALU
Susi Agus Stevani, Dance Dance, Husnul khatima
Abstract 27

This study aims to determine the effect of pineapple fruit prices, gadung mango fruit prices, consumer income, number of family dependents, and age of consumers on demand for pineapple fruit in Palu City. This research was conducted in August - October 2019. Determination of respondents using accidental sampling, where the independent variable (X) is 5 and the dependent variable (Y) is 1. Then the two variables add up to produce 6 variables. 6 variables multiplied by 5 number of respondents for each variable resulting in 30 pineapple respondents in this study. While the analytical tool used in this study is the multiple linear regression analysis tool. The results showed that together the price of pineapple fruit, price of gadung mango (substitute), income, number of family dependents, and age had a significant effect on the demand for pineapple in the Manonda traditional market in Palu City. While partially it is known that the variables that have a significant effect on the demand for pineapple are the price of pineapple fruit, consumer income, and the number of family dependents. variables that have no significant effect on demand for pineapple in the traditional market inpres Manonda, Palu City.
More.. PDF
Abstract PDF
Articles
ANALISIS PENDAPATAN USAHA COKELAT OLAHAN PADA INDUSTRI UKM SAKAYA DI KOTA PALU
Didin Palamma, Sulaeman Sulaeman
Abstract 31

Cocoa (Theobroma cacao L) is a cultivated tree originating From South America, from which cocoa beans are produced a processed product known as chocolate when developed throungh the Agro-industry. One of the well-known industries in Palu City today is the Sakaya SME Industry. The Sakaya UKM Industry produces unique chocolate products both in taste, packaging from, in terms of type, and the distinctive aroma of the chocolate. This study aims to determine how much the income level of the chocolate business in the Sakaya BTN Pengawu, West Palu, Palu City in January 2020. The thetermination of respondents in this study was carried out purposively, the selected respondents were owners and employees from both the production and marketing departements of the industry. Sakaya UKM. The data used in this research comes from primary data and secondary data. The analysis used is Income analysis. The results showed that the income earned in November and December 2019 was Rp. 16.958.751. For Conventure chocolate. Convecture chocolate is produced every month according to consumer demand. From November to December, Convecture chocolate Demand was made so that the 2019 Sakaya UKM’s Conventure Chocolate income was quite good.
More.. PDF
Abstract PDF
Articles
ANALISIS MARGIN PEMASARAN KOPRA DI DESA SIBOANG KECAMATAN SOJOL KABUPATEN DONGGALA
Fikmal Fikmal, Sulmi Sulmi
Abstract 23

This study aims to analyze the copra marketing chain from Siboang Village, Sojol District, Donggala Regency to the hands of consumers. This research was conducted in Siboang Village, Sojol District, Donggala Regency from July to September 2020. Respondents were determined using simple random sampling method (Simple Random Sampling) with 32 producers (farmers) as selected by means of the Tracing Sampling method in order to obtain 1 treder and 1 wholesaler. Marketing show thet the copra marketing channel in Siboang Village is through two marketing channels namely: Farmers Trader, Collectors, Factory wholesaler (final concumers), Farmers, Factory wholesaler (final concumers). Theresults of channel 1 copra marketing margin analysis, namely MT = Rp. 2,000/kg while the second channels is MT = Rp. 1,000/kg. The share of the price received by copra farmers on channel 1 is 75.00%, while in the second channel is 87.5%. Marketing efficiency in the first channel is 9.85%, while the efficiency value for channel II is 8.58%, so that of the two channels, the most efficient channel is the second channel with an efficiency value of 8.58%.
More.. PDF
Abstract PDF
Articles
ANALISIS NILAI TAMBAH KELAPA MENJADI KOPRA DI DESA TANDAIGI KECAMATAN SINIU KABUPATEN PARIGI MOUTONG
Ahmad Rafik
Abstract 31

Coconut (cocos mucifera) is one of the plantation commodities that has an important role in the economy in Indonesia. In addition to contributing to Indonesia's exports, as a result of foreign exchange, as well as a source of income for coconut farmers themselves, helping the absorption of labor from the upstream to downstream sectors as well as playing a role in meeting domestic needs. Coconut is a versatile plant because all parts of the plant are useful in everyday human life. The purpose of this study was to determine the level of added value of coconuts into copra in Tandaigi Village, Siniu District, Parigi Moutong Regency. The location of this research was chosen purposively with the consideration that Tandaigi Village is one of the copra-producing areas in Siniu District, Parigi Moutong District. The study was conducted for ± 2 months from September to October 2019. The sample in this study was coconut farmers in Tandaigi Village, Siniu District, Parigi Moutong District. Determination of the sample is done by simple random sampling (simple random method). The number of samples is 123 coconut farmers who seek copra. This research uses secondary data and primary data. The results showed that the average amount of copra production produced by Coconut farmers in Tandaigi Village, Siniu District, Parigi Moutong District. An average of 16,919,000 kg / harvest season, with an average revenue of Rp. 4,289,545,455 / harvest season, the total labor cost used by farmers is Rp. 31,529,500 / harvest season. The average income earned by copra farmers is Rp. 3,353,803.03 / harvest season. Revenues are obtained by reducing total revenues and total costs used during the coconut production process into copra
More.. PDF
Abstract PDF
Articles
ANALISIS PEMASARAN KAKAO DI DESA OMU KECAMATAN GUMBASA KABUPATEN SIGI
Andrew Anugrah Pratama
Abstract 37

Cacao (Theobroma cacao L) is a type of plantation that is often found in the Central Sulawesi Region. One area that can produce cocoa is Sigi Regency, there are 15 districts that can produce cocoa production in Sigi Regency. The purpose of this study was to determine the form of marketing channels, marketing margins, the share of prices received by farmers (producers) of cocoa and the efficiency of cocoa marketing in each channel in Omu Village, Gumbasa District, Sigi Regency. The results of the analysis show that there are two forms of marketing channels in Omu Village, Gumbasa Subdistrict, Sigi Regency, namely: Channel I) producers sell cocoa to collectors, then sell it to large traders and sell it again to end consumers (Brown House Industry). Channel II) Manufacturers sell cocoa to large traders, then wholesalers sell to end consumers. The total marketing margin of cocoa obtained in the first channel is Rp. 5,500, and the total margin obtained in the second channel is Rp.3,000. The share of prices received by producers in channel I was 82.53% while the share of prices received by producers in channel II was 90.47%. Marketing efficiency of channel I was 2.06%, and channel II was 1.82%, so channel II was more efficient than channel I.
More.. PDF
Abstract PDF
Articles
ANALISIS PENDAPATAN USAHATANI KELAPA SAWIT POLA KEMITRAAN DENGAN PERUSAHAAN PT. LETAWA DI DESA MAKMUR JAYA KECAMATAN TIKKE RAYA KABUPATEN PASANGKAYU
Sutriadi Sutriadi, Hadayani Hadayani, Made Antara
Abstract 32